When I look back at the warriors I have already shot, I see an amazing journey. My photography has become much more grounded. And so have I. I’ve had quite a tough and turbulent last 12 months in pretty much every aspect of life but now I am determined, positive, grateful and my goals for 2015 and beyond are set. Initially, the Warriors Series was supposed to be an art exhibition. Not anymore. Initially, the Warriors Series was supposed to be about Martial Arts. Not anymore. What I am looking at producing now is a book called “Warriors”. And this N°9 shoot made it clear that it will be primarily about the Martial Artist not just the Art form that he studies.

What is super special for me about this shoot is that it was my first editorial piece (ever) and on top of that for a brand new martial arts magazine called The Complete Martial Artist . And if you check out their magazine you’ll know why I am so over the moon: it is a sexy looking mag! Great imagery is important to them, NOT to look like all these other visually unappealing martial arts magazines is crucial to them. And they wanted to talk to me and work with me precisely because they had seen my Warriors Series (little squeal of excitement!). The downside is that I will have to wait until March next year to publish those photos as I have to wait for the magazine to come out first!

This shoot was planned very short term. We had talked about shooting with Chan a while ago but him being based in Adelaide coordination was not always possible. Luckily Nicole (the Creative director of the magazine) was absolutely happy for me to do a Warrior at the same time. And on a Friday I get the call “Chan is in town, can you shoot Monday, Tuesday or Wednesday?” Wednesday it was, right after my citizenship test (which I passed with 100% ~ hello Aussie passport!). The challenge was to come up with a location on such short notice. Initially I wanted to have a nice dense bamboo forest or a tropical backdrop. But then I also needed a remote place since we wanted to use training weapons and didn’t have time to worry about a license (fines are super high if you are caught in public with even just a training weapon in Victoria Australia). We thought about rooftops, industrial spaces, beach… the first two were too difficult to source, the third too obvious… so we settled for the forest, which turned out to be a great idea. Not one soul around, heaps of space, lots of different angles. And one flying Chan….

Chan Griffin is an absolutely amazing Martial Artist and a great soul. He has worked as stunt coordinator on the latest Wolverine movie (the one with all the Ninjas and Samurais!) and has worked as stunt double on various movies. What I found fascinating is that his base Martial Art is Capoeira, somehow you don’t get that a lot. But like most, after a while in one discipline he started cross training in Muai Thai, Kung Fu, BJJ and many more to complement his style. And Chan is the absolute king of flips, jumps and flying through the air (with such speed that I had to ask him to take the flips out of his jumps because for the first time I just couldn’t keep up!)! There were some moments when I looked through the lens and he looked just like a young Bruce Lee. Chan has a very grounded almost ZEN feel about him but when he starts moving he is so fast and explosive, it’s absolutely amazing to watch (and hard to capture). I had my Elinchrom Quadra with me but somehow I just didn’t like the lighting. I took a shot without and loved it! Of course we used the oil again and Chan’s complexion photographed extremely well in the diffused light (lucky again ~perfect overcast day and bits of sunlight just when I needed it!). I had to trade ditching the lights with some added grain but I decided that this only added to the organic feel of those shots so I was happy to do so. I mostly used my 70-200mm Canon lens and the 50mm.

I could probably fill a whole book with photos of Chan. He’s one of the easiest people to work with and his experience on set makes it even easier. We are planning to do a shoot including pyrotechnics…. I can’t wait! 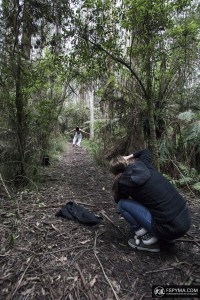 Two in one. Or just too unique to be put in a “category”. This Warrior (again) is super special because of various reasons. One of the reasons being that this shoot was my first editorial piece for a brand new martial art magazine called The Complete Martial Artist.