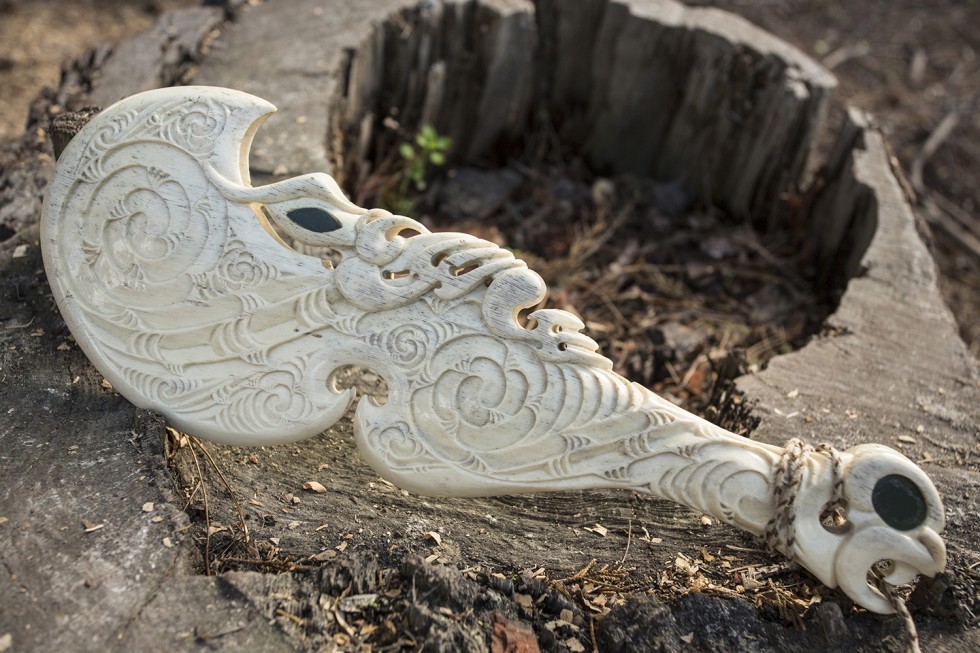 POI – this device originated from the Maori ancestors wanting to steal the eggs of a bird similar to but apparently much bigger than an Emu. The eggs being quite big it was hard to steal them and run away from an enraged bird! So they built little baskets that were attached to a string. An egg was filled in every basket, flung over shoulders and so the warriors could run away. As Jade said, this technique was probably too efficient as the bird is now extinct. But then this weapon was turned into what it is today.

What I was introduced to and saw the boys use is a pretty heavy “ball” that is attached to a rope. They swirl it around in the air and toss it in attempt to playfully hit someone else. It’s quite effective wrist training as it develops strength and agility plus it trains reflexes while being playful. There are a few games they play such as  A) dodge B) deflect with the hand C) catch the rope. I tried them all, its not as easy as it sounds!

Patu (club) for close combat. The warrior usually carries one in his belt. There are various types and they are all hand crafted and beautiful. Some are made of green stone or whale bone. Jade showed me a beautifully carved ones made out of whale bone that has the natural curve of the bone. There is a variety of different Clubs that have different edges for different applications.

Walking Stick for older people as the taiaha is too heavy. Very good wrist training and admittedly would be quite effective if applied!

The Taiaha is the most impressive of all treasures in my opinion (clips). It has four “eyes” so the taiaha can see in every direction to warn the warrior of approaching danger. It is made of compressed wood and carved beautifully.

Haka: Ha means breath, Ka means ignite. So like lighting a match. What tourists get to see is an adapted form of the original Hakas. Something a bit more showey like the travelling monks for Shaolin. It has roots in the original hakas but it doesn´t have a martial application or aspect.

Fighting Style: Maori warriors don’t like to block as it takes a lot of energy to use force against force. They prefer using footwork to evade and then strike straight away. In saying that, they do have parries/blocks/deflections in conjunction with the required foot work & counter strikes. The epitome for the warrior was to eventually be able to read an opponent well enough so as not to need to block but to almost respond before the opponent realized themselves which strike and where they were about to deliver.

Gradings: There is no belt system and the students / warriors are graded on various things. Technique, how much they apply themselves, how they help others, how much they help out in general, attitude. Instructors discuss and “promote”.

Styles vary depending on the tribes. Jades style is from Rotorua north island. There are thousands of boys and men who practise. More in North Island than South. There is a style of Taiaha training that is “full contact”, where they spar. Most styles are mostly technique, forms and haka.

Painting Stones: Chief and the head instructors were painting river and beach stones with Maori patterns. They draw freehand, they know the meaning of the signs. Chief said that “painting stones keeps you young”. It’s a form of meditation. 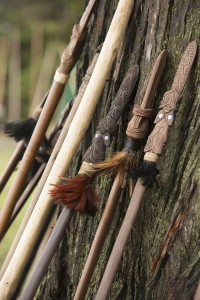 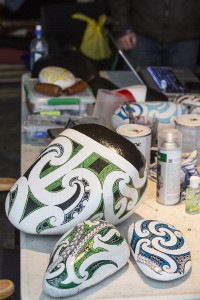 NEXT PART: MODERN MAORI WARRIORS PART 5 ~ CEREMONY OF THE DEAD